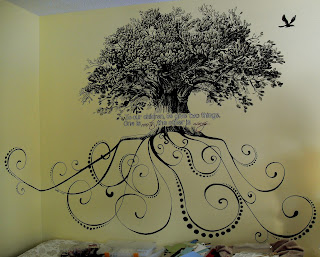 "To our children we give two things, one is roots the other is wings."
I know this will come as a HUGE surprise but the other day I was visiting with my Mom and we were talking about Anna.  She was commenting about how she loves hearing about all the things I encourage Anna to do for herself rather than do for her.  Now I don't want to sound like I'm just bragging on my girl (although that is really easy to do) what I really want to do is convey the difference between roots in a five-gallon bucket and roots in good earth.
You might be wondering what is the difference...we all know the advantages of a five-gallon bucket you can use really good soil, take good care of the tree then bring it in during the harsh winds and blustery winters; really protrect it from all the things that could bring it harm.  If the tree is planted in the earth, it is subject to all the elements and you can't really protect it.  Ahhhh, exactly....our kids are with us today but they'll be gone tomorrow.  If we protect them by keeping them out of the wind and snow, their growth will be stunted.
Anna has given away saplings the last three years, we have planted them both ways and by far, the saplings that have truly thrived have been the ones planted straight into the earth allowing them to develop strong roots.  Their branches will soon produce fruit that will be capable of taking flight and allowing another tree to begin.  Wow!  That's exactly what I want for my kids to grow strong and be prepared for life beyond the protection of Mom and Dad so someday they can be parents who plant seeds with strong roots, too!
I know it's hard to see our kids going through the muck that life can throw at it but I encourage you to help them get through it without "bringing them inside."  If you don't plant them in the earth, before you know it, the time will come for them to be transplanted without the strong roots needed to see them through.
Remember, the lyrics from my favorite song...
"I'm crazy blessed and oh so lucky to be the place you go when need a kiss oh don't be afraid for what you have is ME!"  We'll always be here to dust them off, give them a kiss and send them right back out there to soar above the crowd!
Posted by DanaAlexa at 7:45 AM 1 comment:

You don't have to believe alike...

Recently I was told that I have a problem.  Boy were they wrong...I have a lot of problems!  But they were referring to something specific that they saw as a problem.  Their concern for me was due to my eyes opening over the last five years.  I guess for this blog entry to really make sense, I have to take you all the way back to high school and Mr. Bill Guy's English class.

We're sitting in class--I remember like it was yesterday; we were supposed to be studying or doing some sort of learning.  But you and I both know that that just means a chance to whisper and pass notes!  My friend taps me on the shoulder and says "I'm gay."  Wow--I'm 16 and don't know what I want for lunch so I'm definitely not thinking about gender orientation...I'm hoping it's not an offer.  So I ponder the statement for a minute then give my response "as long as you remember I like guys we'll always be friends."  That conversation took place back in 1987 in the buckle of the bible belt.  AIDS was new, people were afraid of gays and hatred was strong.  I knew I wasn't gay but I also knew it wasn't right or fair to hate, judge or be afraid of people who were (and still are) my friends.

Today, it's the 'new millinium', don't ask/don't tell has been repealed, some states recognize civil unions yet there is still an undercurrent-a movement who is against this population who is different.  These people quote scripture and claim that the gays will burn in hell for their wicked ways.  Well what about the wicked ways of the accuser?  The finger pointers may not be gay but just by judging others they are doing the very thing God has said we aren't to do.  God is the one true judge...whether your sin is abuse, cheating on your spouse, looking at pornography, speeding, lying, excluding people, profanity...take your pick because there are plenty to go around!

The message in my bible is one of love and understanding.  Did Jesus throw the stone?  No he simply drew in the sand (I think it was the accusers sins, thanks Padre for that illustration) and asked the one who had not sinned to cast the first stone...no one picked up a rock that day, in fact according to what I've read they all turned and left.  Jesus didn't put the woman down or tell her all she had done wrong He simply said 'go-sin no more'.  How many of us can genuinely say I have never sinned, I will never sin and can cast that stone?

Mama always said we were supposed to love the sinners not the sin.  She definitely lived that through my sinful college days.  Oh so often she said these words to me: "Dana, I don't like what you're doing but I love you".  It stuck and now as a mom myself, I find myself teaching my girls that it's easy to love but when we like someone or something it is much more serious.  Today I pulled out the handy dictionary to help drive home my point.

like (v.)
1. to be suitable or agreeable to; to feel attraction toward or take pleasure in

love (v.)
1. unselfish, loyal and benevolent concern for the good of another

So the moral of this blog is you don't have to like the lifestyle that is chosen by others but you really should love them.  Remember God's house is big and has many rooms...He has a place prepared for those who 'do unto the least of them'.  No sin is bigger than another, I believe they're all equal in His eyes.


We're ALL crazy blessed children of God...we're all sinners...
we may not all believe alike but we can all LOVE alike!! 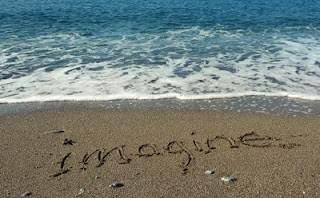 "will just make you stronger..."

I can't even begin to count the number of times I have heard my Mom tell me this; even worse I can't count the number of times I've used it on my kids!  However the other day, I was talking to my Dad about a certain situation that has been a thorn in the side of our family for several years I caught myself using it on him.  Then I really thought about it perhaps the real saying ought to be:

"What doesn't kill you instantly will add up over time and kill you eventually..."

But that doesn't sound nearly as nice.  I'm the first to admit that I have been crazy blessed all my life but being crazy blessed doesn't make me immune to the little things that cause stress and all that stress can add up to ill health.  Now I'm not just talking about the biggies like heart attacks, high blood pressure and strokes...I'm talking about mental health.  The kind that causes you to think about and obsess about things that are out of your hands.  We've all had something in our life that happened wa-a-a-ay back when someone wronged you or made you mad and even today when you think about it your blood boils.  It's just not healthy to let someone or some situation have that kind of control and power over your life.

Today, I'm going to share with you a little morsel I heard over the weekend.  I was driving along, listening to KLRC when the guy on the radio did one of those minute mini-sermons between songs.  After he finished, I had to pull over and grab a pencil as I scribbled on a copy of the NWACC newspaper:

"Joy doesn't equal happiness. Happiness is just an emotion whereas joy is a state of being. Knowing God and having faith. In all things let us have joy"

So maybe...just maybe the phrase my Mama has used on me all these years is right if I will just remember to let my life be filled with joy and not sweat the other stuff!  So today, tomorrow, next week or next year when you start to feel your blood boil over you-know-who and what they did way back when...just take a deep breath and remember you are indeed always crazy blessed and living a life filled with joy is possible no matter what your circumstances!  Stop allowing something that is in the past to rob you of your joy TODAY!
Posted by DanaAlexa at 12:33 PM No comments: