Crosswalks the root of all evil? 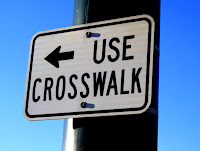 Crosswalks, really...how can they possibly be the root of all evil?  It boils down to following the rules and being a good citizen.  Now this is a topic that has been of great concern to me for quite some time.  I haven't felt "qualified" to actually write this post until a particular incident that happened last night.  For you to fully appreciate it, I must take you back in time. 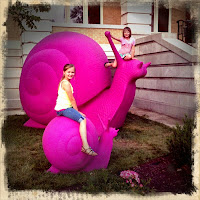 We absolutely LOVE our hometown of Bentonville, Arkansas.  There is a beautiful downtown area with a town square complete with a fountain, courthouse, bank, incredible places to eat, giant pink snails and of course Walton's 5 & 10!  It is the epitome of of small town and symbolizes everything we love about living here.  You never know who you'll see on the square--the Mayor strolling through picking up small pieces of litter, the mother with her kids playing at the fountain, the yoga class working on a new pose or perhaps the dance class taking it outside for the day.  So now you have an idea of what it looks like, now imagine the same idyllic setting crowded with traffic.  It's not bad, just different.  A lot of cars funnel through this downtown area.


Now just a few steps from this picturesque square is the dance studio where my sweet Jessica twirls, spins and taps!  There are hundreds of little girls who dance in this studio because the owner is absolutely amazing--we have watched her grow up through the years.  (When she was in high school she taught Anna jazz so we feel kind of partial toward this young woman who has created an amazingly successful school.)  Her studio is nuzzled between a restaurant and another business with limited parrallel on street parking in front however there is a grocery store across the street with a rather large parking lot where most of the parents park.  Sadly, there is no crosswalk in the middle of the street for the children to cross so they must walk ALL the way to the end of the block in order to cross in a crosswalk with a stopsign.   Needless to say very few parents and students take advantage of the safety of the crosswalks, most just rush right across the middle of the street assuming that traffic will stop.  (We all know what happens when you assume something...)

Now my blood really started boiling one day when I was driving in front of the studio when a mother with children in tow stepped in front of my vehicle and I had to slam on my brakes to avoid hitting them.  All my children were safely buckled in the van and I went into a rant.  It went something like this:

"That is the problem with society today!  No one uses the crosswalks.  They think they are entitled to cross the street wherever they please and the world will come to a stop for them!  These parents are teaching their children to disobey the law!!  Jaywalking is a ticketable offense and there needs to be an officer here writing them!  One of these days one of these kids is going to get hit!!"

I continued and told the girls about a boy I knew as a child.  He grew up to be a young man attending Oklahoma State University.  One bright, beautiful fall day, he and his friends had finished class; they were laughing and talking-backpacks heavy with books but a day full of promise of all the things life had before them...until Brad and his friends failed to walk the half a block to the crosswalk and began crossing the street without looking.  Brad had the misfortune of being closest the the vehicle that was coming and couldn't stop.  The car hit him and he died.  Yes, he died because he didn't take the time to walk to a crosswalk and cross the street properly.

Not only are crosswalks the safe place to cross, it's the law.  Parents please teach your children to respect the laws.  We are crazy blessed to be living here in the United States!!  If we teach our children that it is okay to break this law, then speed down the highway and show it's okay to break that law, we let them have Facebook accounts when they're too young to understand the social pressures and implications/power of what they are writing and posting--what are we really teaching them?  If they don't have to obey laws then why should they have to obey their teachers, bosses, etc.  We complain that people are feeling entitled to so much like food, insurance, housing and money from the government...something for nothing.  Have some pride, stand tall and teach your kids to obey the rules.

P.S.  My reason for writing this blog that has been on my heart for sometime is my sweet Anna.  As you know, she is involved in drama and 9 months of the year since she was 14, we have traveled that specific stretch of road referenced above to play practice--last fall, she started driving herself.  She was so nervous each night (especially during the dark winter months) because there were so many children crossing in the middle of the street-darting out from between cars.  Last night she was on her way to rehearsal at NWACC and she called me in a panic--"Mom, I almost hit a girl!!  There was a large vehicle and she stepped out in front of me!  I had to swerve to keep from hitting her!  She was probably 12 or 13 and she just looked at me like it was all my fault!!!  Mom, I'm so careful driving through there because I know there are so many kids; I can usually see legs or a head but it was different tonight.  The car was so tall and I couldn't see her at all until she stepped out."  My Anna is seventeen...I can't even begin to imagine the heartache she would have to live with for the rest of her life if she hadn't been able to swerve and had hit that girl and injured or worse killed her.  Please, please take the extra 30 seconds and walk to the crosswalks--no matter how hot or how cold it is!! 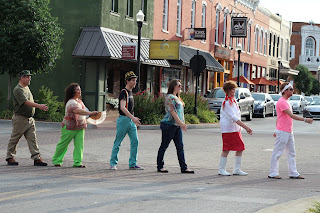 ****FYI the sweet young dance studio owner has requested time and time again for everyone to use the crosswalks.  I have heard it from her verbally and seen it in newsletters.

Posted by DanaAlexa at 9:37 AM