...in the end is a beginning 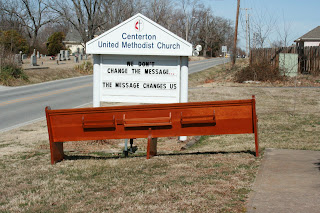 Way back in 1997, we lived in Bella Vista for 12 weeks while Ted was an intern for Walmart.  Being a housewife, I knew that I would have to get active with a church in order to meet people so we attended First United Methodist Church in downtown Bentonville.  Wow!  What an amazing church home we found.  Many of the people we met that first summer are still a part of our lives today.  Without them I am sure that the transition to life away from family (our parents live in Oklahoma) would have been much more difficult!!

Flash forward to the fall of 2005, Anna was baking Pumpkin Rolls (her 4-H project-Tastebud Treats).  We were at the fall UMW Bazaar where we met Blake and Jan Lasater; we had heard through the FUMC newsletter that Blake was starting a new church, something called Living Waters.  I had written Blake earlier that week telling him we thought we wanted to be a part but all we had to offer was our family and our time.  He said "come on...we need people...the money will come!" 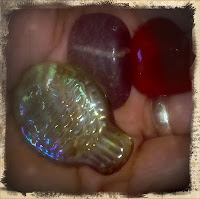 I can't remember the exact timing but sometime in early 2006 we began meeting in the Chapel on Sunday evenings at FUMC.  Within a few weeks, it was easy to see we had outgrown this small space and our people were hungry...hungry for worship on Sunday mornings in a place of our own.  Next we moved to the VFW building in downtown Bentonville (just behind the Arvest bank on the square).  We had an untuned piano and hearts ready to be filled.  The Sundays were a time of true fellowship, we laughed, ate doughnuts and received the word along with some cool visual aids.  (Yes Blake, I still have the rocks to remind me 'let he who has not sinned cast the first stone', a red heart to show the love we have to share as a congregation, the cross necklace fashioned by your friend, the shells for the baptism of my children.)

Before long, we realized the VFW just wouldn't cut it--we were young with lots of children and those kids needed a place to call their own.  Just in time for Easter 2006, Emerald Plaza became our first real home.  Sunday mornings with Jerry Moore, Tom Rife and Blake standing at the ready greeting us as we pulled into the 'strip mall' area.  Donna Rife, Matt R. and Jerry D. made worship a beautiful experience with the incredible alter designs.  We were small yet somehow the word traveled and we were continuing to grow. 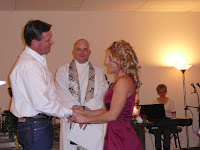 Late 2006 and we needed yet another location with more room...we made another move to Raintree Plaza where we held our first wedding.  Troy and Laurie...beautiful people with amazing children!  So much love and no Sunday is complete without a prayer being lifted for the 'lost and confused'.  We began our time at Raintree with 3 suites of office space and grew to 5 before we left.  While at Raintree, our fearless leader was called to serve our country and was gone for 9 months.  During his absence, Brian Timmons and Lee Myane tended the flock and helped us continue our course.
Time flew, we laughed, we cried, we went through growing pains, shrinking pains and everything in between.  We celebrated weddings, baptisms, funerals and lots of church meals in our Raintree home.  In 2009  we learned that a sister church in Centerton was struggling and we were looking for a more permanent home.  After many meetings the two became one; like any union there were disagreements and things we had to work out but we know that all relationships require both parties to give in sometimes.  Living Waters at Centerton was born and was on a good path, opening a food pantry, serving our community when a life change occured...a fire.
But we're not finished yet!  There is still work to do, hearts that need healed and lives that need a refreshing drink of Living Waters.  Yesterday for the first time in a long time, Blake share with our congregation another visual aid...this time it was a piece of glass that had been in our baptismal fountain.  A simple piece of glass to provide a tangible reminder to be like Job who even when all was lost he proclaimed:
“Naked I came from my mother’s womb,
and naked I will depart.
The LORD gave and the LORD has taken away;
may the name of the LORD be praised.”  Job 1:21
﻿
﻿ 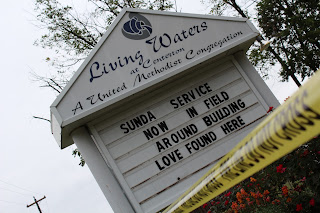