This morning I read Genesis chapters 1-3 like I've done dozens of times in my 49 years. Today I read it slow, with intent; to quote a favorite movie line, "I sucked the marrow" from it.  I finally got to the part about the consequences and I looked down at the notes near the end of chapter three, something caught my eye. It spoke of the painful toil that mankind would be subject to because of our decision then it went on to quote Wesley, "humanity was only sent to a place of toil, not to a place of torment."  I suddenly heard the the chorus of angels in my head and it all clicked.


My heart has felt a heavy sadness the last few months.  I feel a disappointment with humanity and I'm really struggling to find the light.  As a child raised in the 70's and 80's the main form of  instant communication was verbal, the spoken word. You were most often face to face with the one you were speaking with.  Regardless of how you felt about societal and political issues I never saw or heard anything more than a slightly elevated conversation that ended with the persons still friends.  Strangers didn't chime in (with hate) because they weren't there but now my heart aches with the vicious attack of words on people via social media.

Recently we had some flash flooding here in Arkansas.  A woman was caught up in the swiftly moving water and her car was filling.  Sadly emergency services did not arrive in time and the woman drowned. The recording of their conversation, and the mistakes made by the operator, has gone viral on the national level and the comments make me think of the angry crowd screaming, "Crucify...CRUCIFY...CRUCIFY!!!" when Pontius Pilot presided over the trial of Jesus.  It really doesn't matter what the headline of the hour is because the treatment is the same. I feel so much empathy for them, a few sound bites or a video clip of a moment and lives are ruined.  An angry society has become the judge and jury passing verdict on every story. The damage is done regardless of the outcome of the judicial system. We, the crowd, aren't following God's example of an appropriate consequence-toil we are tormenting causing mental suffering.

President Trump does or says something half the population disagrees with and suddenly the airwaves and social media streams are filled with scalding hate, his followers retaliate with hatred-the next day the cycle continues.  Walmart decides to no longer carry handgun ammunition and the people are divided.  The NRA is found to be "at fault" in San Francisco-both sides shouting their opinions with no discussion, only anger.  Let's take all the guns away-no we need more guns! You're either pro-life or you want to kill the babies.  I shouldn't even mention the refugee crisis debate. White people are to blame, no maybe the Mexicans, nope the Blacks, the Muslim...let's point our fingers at anyone who isn't like us or disagrees on this topic (whatever the topic)...society doesn't seem to be content to voice their opinions and have an educated discussion they only want to express negativity based on the soundbyte they hear over and over or the headline of the article they didn't read.  Again, spewing torment-no consequences, no learning simply keeping their anger on a simmer all of the time.  What ever happened to talking about it, working through an issue and both sides giving a little to come up with a reasonable compromise. The anger, the hate, it only serves to divide and make it worse because someone will always be the loser.

God could have scrapped humanity that day he came in and found Adam and Eve in their fig leaves.  He could've started over again and again and again until we remained perfect clones of him with no free will.  Instead he gives us the freedom to make decisions and have opinions.  No two people are the same.  No two people agree 100% of the time on 100% of the issues!  It's just NOT possible.

If you're one of the people spewing your point of view, unalbe to discuss or consider compromise I challenge you to go back and read Genesis 1-3.  Read it several times, let that compassion that was shown to humanity sink in.  Do you have compassion?  Real compassion, the kind that is willing to look at something from all angles and work together for good (toil) or are you so focused on your way that you don't care who gets hurt (tormented)?  I'm tempted to stick my head in the sand and ignore all topics facing our society but that really isn't the answer either.  My sister was afraid about bringing a child into this world way back in 1988, she called my Dad for wisdom and his words have stuck with me, "if the good ones don't have children, the world will never get better."  People, if you claim to be a christian, one of the "good ones," then it is your responsibility to lead the way with compassion, understanding, listening and maybe changing a little from your "perfect" viewpoint so we can all work together and mend the hate.  Have a discussion! 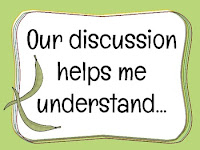 Posted by DanaAlexa at 2:32 PM