"Forgiveness is balm for the soul of the wronged.  It is something deeply personal."

I was raised in the church being told to turn the other cheek and a constant reminder that Christ made the ultimate gift of forgiveness by giving his life.  Both are grand means of forgiveness but I think there was a little more to the story than just turning the other cheek.  Forgiveness isn't a little thing, it isn't something you just do in passing (insert Oprah here giving away forgiveness on one of her shows-"you're forgiven and you're forgiven and you get forgiveness, here's more forgiveness....more and more forgiving until the entire audience is jumping up and down because they received it and everyone is magically a perfect person.) That's not how it works!  That's not how forgiveness is meant to be.

The ultimate sacrifice by Jesus for our forgiveness worked because he is part of the Holy Trinity and they have a kind of super power. They have a relationship with every single person who has ever roamed this earth, they covet a relationship back; the forgiveness from that sacrificial act was deeply personal and genuine for each of us-it wasn't just a simple blanket I'm forgiving everyone of everything.  Although I didn't have a name the day he died on the cross, he knew I was to be.  He knew I was to be an imperfect, flawed human who would need forgiving time and time and time and time again.

It's taken me a lot of years to really get a handle on the super power of forgiveness.  I'd absolutely love it if everyone could understand it.  (Maybe Marvel or Quentin Tarantino will read my blog and create a movie about it-the Forgiver, sounds ominous but I can almost hear it in a James Earl Jones or Samuel Jackson voice being announced from the big screen.  Of course it would have to be played by Denzel.) Until a few years ago, I thought forgiveness was a burden to bear, something I had to do if I were to be a "good Christian."  All the sermons about forgiving others because Christ forgave you.  That's just wrong!  Jesus didn't die on that cross just beause his daddy told him to, it was so much deeper. >a very personal, quiet plea, "father forgive them."< I hope as I teach our children about forgiveness they'll get the real understanding.

Forgiveness is deeply personal.  I think it ranks right up there with making love to your partner and giving birth to your children.  When we hold on to a wrong, it's like an ulcer, a splinter, or even arthritis.  We bury our feelings for a while, deep down inside because we're hurt and angry-they wronged me-how dare they do that to me?!?!?!  We bury it and almost forget about it then we see their name on Facebook or maybe run in to them at the store or church and all of a sudden your psyche is screaching all over again.  You feel your cool begin to bubble because they wronged you.  They have no idea, they're living the life and maybe even laughing with their friends.  You continue to seethe and probably even wonder what gives them the right to enjoy their life when they've been so horrible to you.  Let me tell you, they.do.not.care!!!!  They probably don't even remember what they did to you and if they do remember they may even think YOU'RE at fault. {take a deep breath here}

YOU DO NOT HAVE TO CONTINUE TO BE IN RELATIONSHIP

WITH THE PERSON YOU HAVE FORGIVEN 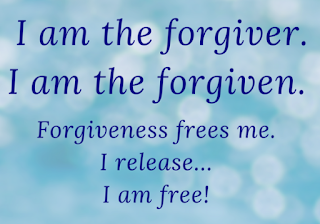 We're human we like to hold on to the pain because it's ours.  Jesus showed us the ultimate liberation of forgiveness.  He grumbled to his dad-take this cup from me.  The burden of showing love was huge, it required dying but in doing so he showed us that if he can forgive the worst humanity has to offer than surely we can forgive the ones who have wronged us.  Let me be clear here because this is where it gets a little tricky-forgiveness doesn't mean the sin never happened, it doesnt mean you are "okay" with what has happened; it means you recognize you were wronged the forgiveness happens in your heart and you feel free.  Sometimes forgiveness comes easy, especially for the little things but the big ones may take time and that's okay.  I actually think that when forgiveness takes weeks, months or even years it's even more significant because the shalom you feel in the long run is the most soothing balm to your soul.

Personal story here...once upon a time I had a friend.  I thought we were really good friends!  The kind of friends whose kids have sleepovers, the kind of friends who bring meals when the other is sick, friends who worshipped and prayed together.  Something happened-we were no longer friends.  I have no idea what went wrong but I felt attacked (I was verbally and um visually I guess you could say).  Now I'm no saint, I reacted like a human-I didn't want this person around my child any longer and I'm sure my smart mouth said words to others about the situation they shouldn't have.  After some significant time had passed I was in my garden and I could almost hear the voice of God saying, "seriously Dana, you've been forgiven by me of some pretty big things why don't you let this go?  Forgive her." I let go and I said the words, "you are forgiven" she never heard them but she doesn't have to.  The cold dark spot I was holding inside and letting fester disappeared.  I never told her, it's been years now and I'm okay.  Forgiving her didn't even hurt, I just had to let it go...the pain wasn't mine, it was hers.  Sadly I don't think she has had the same experience.  I've seen her several times and my heart aches for her.  I've smiled, even said hello but I can see in her eyes the look of one who carries her burden heavy-whatever went wrong, whatever I need to be forgiven of, she holds on to it like some kind of prize.

My Angel 2 has had to do more than her fair share of forgiving this year, I know she is a better person for it.  Watching her hurt when pain has been doled out by someone like they're generous with the Halloween candy has been heart wrenching for me as a parent.  You know, hurt me-hurt my kid?  The proverbial cock has crowed multiple times but I know my girl more importantly I trust her.  We have the kind of relationship where she knows she can be honest and real with me without fear.  This last round may take a bit for her to release but I'm confident she will be able to say with sincerity, "you are forgiven" and when she does, she wins.

*A special thanks to Heath Bradley, pastor at Living Waters Methodist Church in Centerton for teaching me about forgiveness so I don't have to carry those "time bombs" of pain around with me all the time!!! 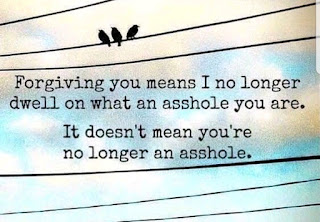 Posted by DanaAlexa at 8:38 AM