A piece of my heart

Family doesn't always share DNA, some family is chosen by your heart.  Today I'd like to share with you a little about a family we are blessed to call our own... 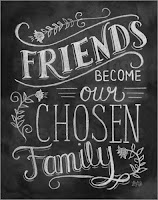 I got my first glimpse at these folks back in the Fall of 2013; I had no idea how important they would become.  Jessica was a whopping 9 years old and really hadn't found her "tribe" of lifelong friends.  We struggled at birthday time because it seemed other than the kids at church there really weren't kids to invite.  For the first time as a homeschool mom, I felt I was failing my child in the "socialization" department and I didn't know what to do.  I'm really not sure why but somehow Jessica and Melissa wound up trying the Ozark Youth Shooting Sports 4H club for their BB season.  Melissa thought it was okay but volleyball was where she had found her "tribe."  Jessica loved it but being 9 wasn't quite ready to compete or participate in their spring season. 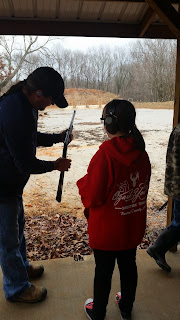 We'll flash on forward to fall 2014 when Jessica returned to BB she was invited to a skating birthday
party-she didn't really know the little girl or the other kids well but she went.  She was treated like family by this group of almost strangers.  As the season continued, I saw coaches laying in the floor with her, helping her get just the right position for prone...encouraging her as her little arms struggled to hold the BB gun steady in standing position.  Her confidence began to grow.  By January she was ready to sign on for the BB competition and learning the rest of the season with the club.  By summer she was ready to go with the rest of the club to their state competitions.  Her coaches had encouraged her and helped her so much that even when they realized just a week before a competition that her Muzzleloader needed new sights and they knew she wouldn't score a single point, thanks to encouraging from a senior member-Felicia-she decided to try anyway just to see if she could load and fire the required number of times.  At competition when she came out one of the coaches asked how she'd done and she replied with a smile on her face, "Zero!"

The coach being the caring guy he is responded, "Jessica, it's okay!  You'll get it next time!!"

Jessica excitedly said, "I don't care!!  I did it!  I loaded and fired every time!" 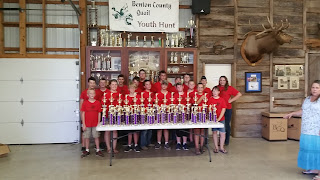 I really watched and listened.  As I did, I realized this group wasn't just an ordinary collection of people, this group had honestly and truly become a real family.  As an newbie, I was in awe of the way they laughed together, cheered their kids together, when one won a trophy they treated every kid as important to the success.  My little girl who didn't score a single point in muzzleloader and not many more in the other disciplines that year was included in the team picture with all the trophies just like the other kids because they love each other.

Slowly but surely I began to feel like I too was a member of this family.  How can you love a child and cheer them on and the love not extend to the parents?  These moms have a very unique relationship because they have found their family, chosen by their hearts; the village, the tribe, the mom squad, the people they call their own.  When Jess had her last competition in 2015, I found myself missing the "family" time with the club. 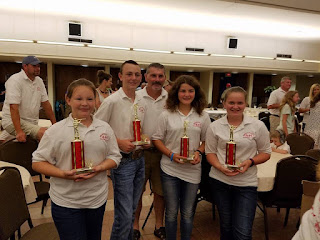 When the fall rolled around I was myself eager to attend the parent meeting.  The insecure teenager inside was thrilled when I was greeted with hugs and kind words as a part of this family.  As the season started and new families arrived I watched as this "cluster" of ladies welcomed new families to the fold by sharing tips, suggestions and how the club works with them.  I've never been a part of anything where all the adults work so hard to encourage every child to succeed.  When Team #3 placed third in rifle and Jessica got her very first trophy most of the coaches had their eye on her.  They knew how hard she had worked and how determined she was to make it. 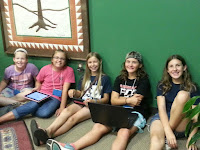 I've seen my girl go from very few friends to sisters...little girls she laughs with, celebrates with, texts with, has sleepovers with and celebrates her birthday with.  My heart is full when I think about this chosen family.  Here's to another season of learning, growing, supporting, laughing and loving each other!

A special thanks to those who crazy bless our family-in no particular order...hoping I didn't miss anyone!  Sarah, Mr. Baker, Cheryl's (each one of you), Tod, Liz, Chad, Mellissa, Benny, Andria, Rob, Robin, Jill, Reed, Tamara, Trafton, Chris, Brian, Will,  Markeeta, Dusty, Doug, James, Bob,  Mr. Joyner, Richard, Kym, Angie, Doc,, Marla, & Andra.  Each one of you has been an influence in our lives, we wouldn't be the family we are today without you!!!!  I love you oodles and gobs!!! 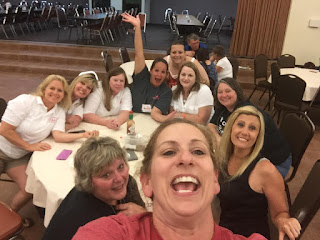 Posted by DanaAlexa at 9:47 AM