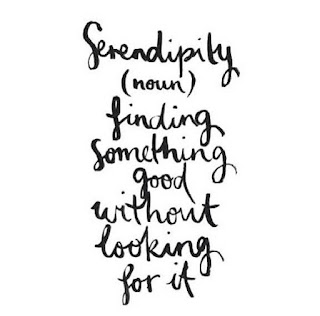 The word serendipity has always been one of my favorites!  I believe serendipity isn't just coincidence, I believe it is God at work.  In 1996-97, Ted was finishing his Junior year in college at SWOSU.  It was common for Computer Science majors to apply for internships for the summer between junior and senior year.  Ted was no different-we worked on creating a resume that we thought would reflect his willingness to work hard and learn.  He didn't have lots of job experience, like many college students, so we researched ways to round out his resume.  One of the things we learned was that if you had a hobby you were passionate about, it was okay to include it.  So being an "aquarium enthusiast" went on his resume.  Little did we know how those two little words would eventually bring threads together in our tapestry of life.

Ted's resume wound up with a distribution center team at Walmart in Bentonville, Arkansas.  The manager asked if any of his team members wanted an intern.  A guy named Lloyd, being an aquarium hobbyist himself, noticed the words "aquarium enthusiast" and said "I'll take this one!" Soon we packed up and moved to Arkansas for twelve weeks....and the years since then have flown by!

>>>If you'll humor me for a few moments while I shift gears serendipity will weave the threads of this yarn together shortly.<<< 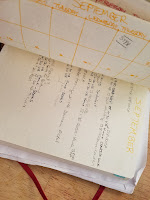 Last year I was searching for the perfect calendar.  A friend showed me her bullet journal created in a beautiful Leuchtturm 1917 dotted notebook and I knew it was the answer to my calendar dreams!  I bought myself some pens and created my perfect calendar/journal/notebook!  I don't only keep dates in this notebook, I use it for doctor notes, meeting notes, things to tell the doctor, the kids community service, etc.  My pink Leuchtturm is hugely important in my life!  At first my doctor, kind of teased me about it but during the year she quickly came to realize how important and effective it was.  I rarely leave the house without it.

>>>Again, humor me while I add another thread to this yarn.<<<

Our sweet Melissa is playing school volleyball for the second year.  What that means to me is that I make one to four trips daily to Bentonville West High School in Centerton.  To help make my life a little easier, I partnered up with two other moms and we established a carpool.  Every third day, I drive three giggling girls early in the morning to practice.  Centerton is kind of a "bedroom" town, a lot of the residents commute into Bentonville or Rogers for work so when I drive carpool I'm going against the flow of traffic.

A couple of weeks ago I was driving the girls to practice.  When I got to the intersection of Main and Bliss I noticed a notebook in the intersection.  I knew immediately that it was a Leuchtturm 1917 and I gasped, I knew that notebook had to be important to someone.  I had goosebumps...I told Melissa if we hadn't been on our way to practice I would've stopped and had her grab it.  By the time I got to the school I knew I had to turn around and go get the notebook.  The girls thought I was crazy. 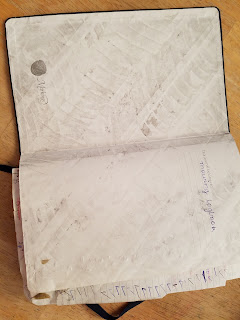 By the time I got back to the intersection, traffic had slowed down the notebook was still there.  It was open with pages flapping, I could see the tire marks across the pages.  I hopped out and grabbed the notebook a quick glance told me it was a mowing business and this was the record of receipts.  In the nearby gutter  I could see pieces of paper so I thought I would retrieve them as well.  As I pulled into the apartment complex I could see that there was a check.  I stopped and picked it up, it was made out to a man and woman with "Happy Life" in the memo.  When I approached the gutter I saw there were several checks, gift receipts and a wedding card to the couple from the grooms parents.  I looked through the notebook and noticed the man had used the notebook to write out the vows he said to his bride.  Wow. 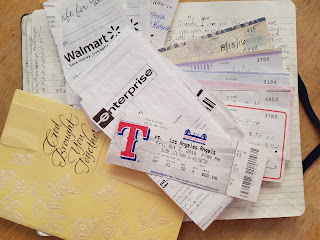 There was no name or contact information in the notebook however a couple of the checks did have the last name of the newlyweds.  After I got home I realized the last name was familiar...it was the same as the maiden name of Lloyd's wife.  Two little words on a resume for an internship led me to find the owner of the notebook. Serendipity.

We never know how the threads of our life will twist together.  Our tapestries are all unique, we get threads and we leave threads in the tapestries of others, we don't know how or when they will impact someone else.  Serendipity = Crazy Blessed Make your thread beautiful, make your thread worthy to stand the test of time, most of all make your thread a reflection of you...crazy blessed child of God. 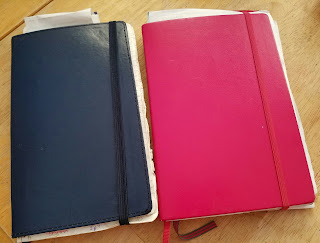 Posted by DanaAlexa at 9:33 AM