Returning Pandora to Her Box 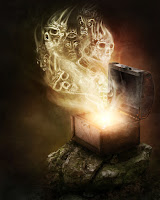 I'm afraid Pandora has been released from her box and I don't know if we can ever get her crammed back in there.  Tonight I was crazy blessed to sit on my front porch and pass out candy to the kids.  I saw a boy with horrible headache from a giant knife that ran through his skull-fortunately it missed his brain,  several little girls dressed as their favorite princess,  a couple of cowboys,  some skeletons,  a couple of dinosaurs and even a nerd.   I enjoyed talking to them about their costumes and visiting with their parents about the ability to still vote YES on Issue #7.  The kids this year seemed friendlier and I heard several cries of "thank you" and more than one "Happy Halloween!"  Their smiles were huge and absolutely infectious.

I was okay with child 1 & 3 but number 2 made my heart sad.   These were kids who heard their parents talking about politics, heard the news, or read some of the horrible memes and articles floating around the internet.  That's all fine but calling your opponent names is poor sportsmanship no matter how it is packaged.  The name calling, the mudslinging has been prevalent all around the political season this year.  Somehow it seems much worse than in past years. 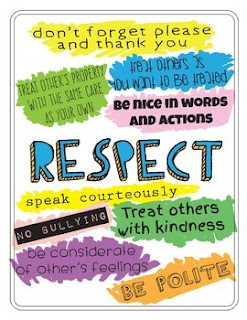 I disagree with the saying that respect must be earned.  I feel that respect should be given to everyone, but like trust it can be lost and have to be re-earned.  I believe that there are people to whom you give respect simply because of their position, title or age (you can  politely disagree with them or be disappointed in their actions but you still show them respect).  Your grandparents, the older folks in the church who you always called Mr. and Mrs., your teacher at school, the principal and your friends parents.  The respect continued to those you didn't really know but affected your life-the Mayor of your town, store owners and Gary England on channel 9 weather!  The next layer of people were ones we'd likely never meet but we respected them because of their elected position-senators, representatives, the governor and the president.  I was a very politically minded teenager, I read the Wall Street Journal and the Daily Oklahoman almost every day.  I really wanted to major in Political Science (so I thought).  I read about candidates and what they stood for, in high school I found a candidate I really was excited about-it was some state election-I can't even remember what it was for!  I went to a local office and made phone calls encouraging people to get out and vote for my candidate and was invited to come to the watch party at some fancy-schmancy hotel in downtown Oklahoma City.  It was crowded with people, balloons and streamers.  Being a school kid in the 1980's I couldn't stay until the election was called but I remember waking the next morning and rushing to grab my newspaper which told me my candidate lost.  I remember the disappointment that someone I had worked so hard to elect, someone I believed in so much, someone so good could have lost.  My Mom, always the wisest woman I've known, shared something with me that has stuck.  "Dana, it's okay.  Sometimes good candidates lose, they can do good wherever they are.  It's our job to support, help and encourage the person elected to do good.  If they don't then it's our job to get out, campaign and vote for someone else next time."

We are crazy blessed to live in these great United States.  They are great!!!  We have so many freedoms and opportunities.  This year we don't have the candidates with the past we'd like to see, we don't have candidates without skeletons in their closets, crude talk or email scandals.  Unfortunately we don't have candidates we feel we can really trust, it's almost a lesser of two evils. What really breaks my heart and hurts my spirit is how hateful and ugly supporters on both sides have become.  A child, a young child slandering the opponent by calling her "Killery."  I don't care what your political affiliation is or who you support, encouraging kids to call names only fuels the bully fire which is the exact opposite of what we are striving to teach our children.

Please consider how you are talking in front of your kids, remind them that Donald and Hillary have been selected by their respective major political parties to run for the office of president.  Name calling and being a bully to your friends and relatives about this election does nothing but cause hurt and further division.  We're one short week away from the big election day, one week away from knowing who our next president will be.  Even if your candidate is not elected, feel free to be sad or disappointed then get behind the one elected-support them, help them, encourage them....if they don't do a good job-campaign, vote and elect someone else in four years.  Let's put a little piece of Pandora back in the box and show some respect for the office even if we don't like the person.  Live up to your crazy blessed potential and be a positive part of the solution not an ugly part of the problem. 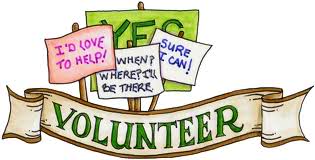 PS This year I have been very active (I'm working to be a positive part of the solution) in the Arkansas for Compassionate Care campaign seeking to legalize Medical Cannabis for 56 illnesses.  I've never smoked pot but I am a HUGE believer in natural medicine and am confident in the benefit of cannabis for a wide variety of illnesses. I was flattered this morning when my oldest daughter told me she thought I was the "purest" supporter of Issue 7.  It filled my heart with joy.